... I would like to thank this snowstorm... for keeping the ER quiet... and only creating a few Saturday night drunks instead of a ton (although the one I'm taking care of is particularly vomit-y) 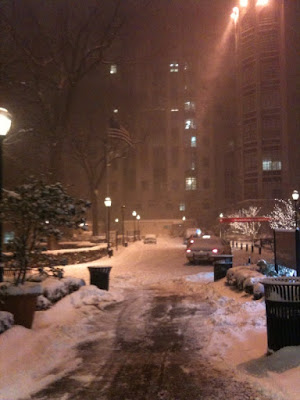 And The Moral of the Story...

So, last night in the Cornell ER was a steady stream of interesting cases, notifications (EMS giving us a heads-up they are coming in with someone sick) and some unfortunate events.

There was the woman who tripped at a holiday party she was hosting. Turned out that she hadn't tripped -- she had had a massive stroke. Apparently there was some debate at the party as to whether she was just stunned from her fall or actually had something seriously wrong. One of the woman's friends basically said "I don't care what all of you think, I'm calling 911." Minutes are brain with strokes. The patient had tPA (the clotbuster drug) on board within 1 1/2 hours of onset of symptoms. For those of you who are non-medical, that's damn good. I later overheard the friend on the phone with other partygoers saying "See? I told you!! I saved her life tonight!" The patient's future is still very unknown (strokes are horrible and take months before a prognosis can be made), but that friend drew a line in the sand and as a result the patient has the best possible chance of making a meaningful recovery she could have.

Later in the evening a horrible case came in. A car pulled into the hospital circle and two young guys helped a third unconscious, pulseless guy out of the car, yelling for help. We brought him straight in only knowing that the patient had told his friends that he was having an "allergic reaction." Immediate CPR was started and the patient was asystolic (flatline). We worked on him for half an hour before calling it. It didn't make sense that this very young professional could present after an allergic reaction without any signs of cardiac activity. He never had a pulse, never had anything other than asystole... it was erie, strange and confusing. Young healthy people's hearts don't just stop. And he was young and healthy.

You work longer and harder on the younger patients for a number of reasons. There's the obvious -- the patient has so much left to life. There 's anothe reason, their hearts are more resillient. Let me explain: There was a heartbreaking arrest a few weeks ago in the hospital. A young, previously healthy person arrested on the main units. Every medical resident in the hospital that night assisted with that code. They coded her for two hours and eventually lost the patient. Why? Because they kept getting her back and loosing her again. This is how you expect young person arrests to be. Horrible, full of hope that gets dashed over and over again. I was in one on my surgery rotation. We kept getting a heartbeat back and we would all take a deep breath and feel the pulse... strong... strong... not as strong... moderate... weaker... gone... fuck! Start compressions!

Back to our guy from last night... he never did what I'm talking about. He was the same age as the other examples I gave, but his heart never gave an inkling. Maybe that was the most confusing part. It just didn't fit and it was hard. What were we missing? What was the silver bullet that would make this guy's heart wake up? We threw every drug we had at him -- nada.

Over the hours following his arrest, more of the story of the events of the night came to light. He had severe food allergies. He was at a holiday party for work and started to have an allergic reaction. People wanted to call 911, but the patient wouldn't let them. He and a friend went trekking across the campus of the facility to go to his locker in search of an Epi pen. None to be had. Then back to his office -- maybe it was there. Nope. They decided to drive him to the hospital but the car was in the 3rd sub-basement. The patient got in the back, his two friends in the front. At this point, the patient stopped responding to his friends. They drove... but they didn't know where the hospital was. It took them 10-15 minutes to find us. The rest, some might say, is history.

No one is to blame for any of the events in any of the examples here. The young man's friends lifted him and carried him bodily into the ER for help. They yelled encouragement to him from the other side of the curtain. The older woman at the party had significant slurred speech seeming like confusion.

The lesson is that one of the hardest thing to do is to stand up to your friends. To go against the group decision or against your friend's own decision. To be the "bad guy" who caused embarrasment by calling 911 for "nothing." It might not be nothing. Forget all that "do what is right" bullshit -- I think it is nearly impossible to live a completely morally just life. I would say, if you're scared, do what will make you un-scared -- whatever that may be, I find that it usually involves getting backup.
Posted by Leah at 4:32 PM No comments: