I find myself in Philadelphia with Rob's family for the second year -- something which I enjoy very much. It's always fun to be with someone in their "native habitat"... in Rob's case, this consists of his mother (who has a special place in my heart for putting me up last year for an entire month), the younger bro and lots of family friends. Thanksgiving this year was a big event consisting of 13 people around one giant table in one tiny dining room. The food didn't fit (never does) so it lived on a separate buffet table. There was a wide smattering of ages from high school, college, us 20-somethings, some 30-somethings and, of course, the parentals who were actually the significant minority!

All in all, yummy, warm, excellent wine selections (thank you, Rob) and then a nice long lie-down on the living room floor in an attempt to digest. Good time =). 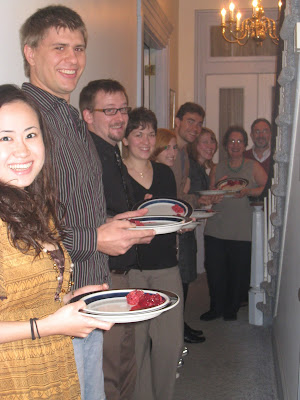 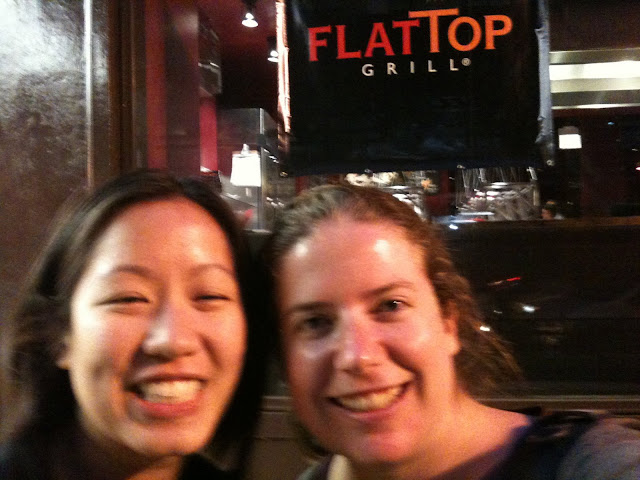 Where did I last leave off... oh yeah, in DC, at G's. DC was great -- Genevieve and I went to the National Opera Trunk sale and got great halloween costumes (see bottom of page).

Chicago was tons of fun -- Aileen was slaving away in MICU (ugh) but still managed to take me to FlatTop -- one of my FAVORITE restaurants of all time! FlatTop seriously needs to come to NYC... I say this when they only just arrived in downtown Chicago. Aileen took me to the new location in the Loop that has only been open for a few months. 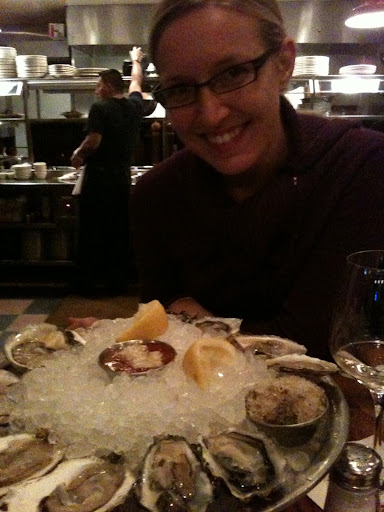 Ashley took care of me for the rest of my chicago stay, including super yummy oysters at Shaw's Crab House -- live music, fab seafood. Overall, the dinner (with two glasses of wine each, and dessert) was incredibly reasonable!! Not something you would expect from a restaurant just off the Loop, valet out front and the after-work-suits piling in. We opted for the significantly more casual Raw Bar half of the restaurant due to the jeans we were wearing and LOVED it!

From Chicago, I jetted off to Seattle to visit Dave and Katie. Katie and I spent the day bumming around Seattle with a trip to one of my favorite stores ever -- Fireworks, and then the Seattle Mystery Book Shop which is wall-to-wall, floor-to-ceiling Mystery Novels. Katie was in heaven.

The highlight of the stay was definatley dinner at the Purple Cafe and Wine Bar with Dave, Katie and Nolan!! It was great to see Nolan -- who I hadn't seen in literally 5 years! The four of us caught up, tasted through a bunch of wines and had a fabulous dinner. 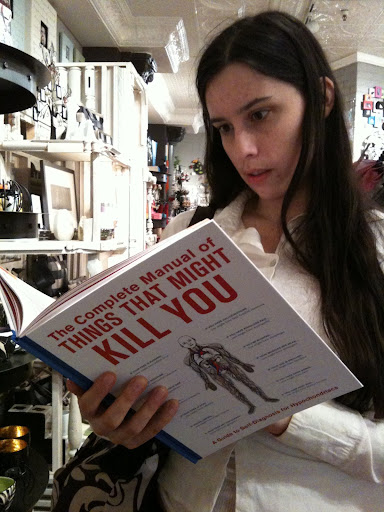 I highly recommend the restaurant -- it is a new favorite of mine in Seattle! The wines are great, the food is delicious, but the also have a sense of humor. The wine list opens with "The Book says "the apple tempted eve."... our book says "it must have been the grape."" The entire list is covered with little jokes. I still know next to nothing about wine, but we ordered a few fleets of which each fleet definately had one "looser" wine and one major "winner" wine.

Of the "Bullfighter" flight of 100% spanish wines (we ordered it as a tribute to the absent Rob), Atalya Amansa 2007 was the winner. From the "Pino Noir" fleet, the Erste & Neue Kellerei "Mezzan" 2007 from the sudtirol-alto region of Italy was the clear winner. Rob wrinkled his nose when he heard that, but it was the best of the bunch!

Returning to NYC and work kindof sucked. It was so great to see everyone, but time flies. I'll leave you with a Halloween picture displaying the awesome Kimono costome I picked up with Genevieve in DC! 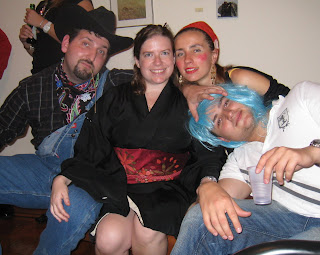 Rob, Me, Elena and Alex on Halloween.
Posted by Leah at 2:50 PM No comments: